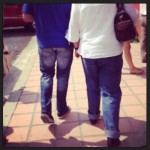 July 19, 2013 By Bea Mackay Comments are Off Personal Stories

The first thing I noticed when I started walking to the town square was the big Walmart next to the hotel.  Then the Sears store, The Scotia Bank, Wendy’s, Starbucks – I could go on an on. I wondered for a bit what country I was in, but the Mexican music blaring from the TVs  in most shops let me know I was in Mexico.
The next thing I noticed was the clothing.  Many people are wearing blue jeans even though it was a hot day. All ages wore them, elderly people down to a toddler in blue jeans bibbed trousers.  There were plain ones, studded ones, new ones, old ones, loose ones, tight ones (mostly tight ones), ones with holes in them and even shorts made of blue denim.  It almost seemed like a uniform.
Then I noticed how affectionate the people are. People held hands, again all ages. parents held the hands of young children but also adolescent children.  Mothers and adolescent children, sons as well as daughters walked arm in arm.  Women friends often were walking arm and arm.  Of course there were lovers walking arm in arm and often canoodling in the streets and on the tour buses (like the couple sitting right in front of me).  Children were everywhere and seemed loved and accepted.
The buildings around the cathedral and town square are beautiful. A lot of the city that I saw was ordinary.  What stood out for me were the few buildings, here and there, along the tour that are obviously well cared for. They have fresh colourful paint and lots of flowers hanging from their windows and balconies. They were like gems among stones.
I got off the bus in Tlaquepaque , an Artisan area, to site see, shop and have lunch.
With care and concern,
Dr. Bea