Mexico Part 7: The Tide is out on Mexico’s Largest Lake.

August 10, 2013 By Bea Mackay Comments are Off Personal Stories 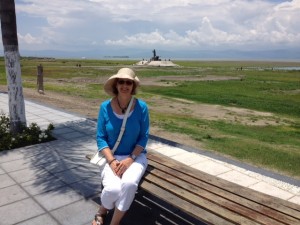 Next we visit the town of Chapala.  I’m informed this is little Canada because so many Canadians’ live here, usually because they retired here.  It is on the shore of Lake Chapala,  Mexico’s largest natural lake – 70 kilometres.

The bus stops on the edge of the lake.  Gloria let us know  that the bus will leave and we have an hour to walk about and then we must be on time or the police will be unhappy with the bus if it is lingering in the area.  I didn’t understand what she said but I understood the word ‘police’ so got the drift of what she said.

Adrianna and I decided to walk out to the island on which there is a large statue.  I live in Vancouver, Canada on the Pacific Ocean.  It looks to me like the tide is out because the water level is obviously low.  It does not smell like the ocean though.  Adrianna tells me the lake is  contaminated.  So sad, such a beautiful lake.  According to what I read – the lake it dying.

We walked along the shore and then through some of the stalls.  Most of the merchandise we saw was not made in Mexico so it didn’t interest me.  We spent some time in Saint Francis Church.  We go back to where the bus is to pick us up and then head of to Ajijic for lunch.

With  care and concern,