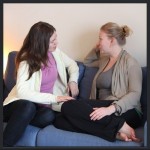 One of the most powerful communication skills is Mirroring, also called Reflective Listening. As a mirror reflects back one’s image, the receiver verbally reflects back to the sender words that let the sender know for sure that the message sent was the message received.

Mirroring is difficult to learn but well worth the time and effort. It pays off big time in developing solid connections between partners. For that matter, it works with people in general. Often when couples I work with learn this skill, one or both will report back how mirroring was effective in a situation at work, with one of their children or with a friend.

Reflecting Listening is NOT repeating the message word for word. That is called parroting. Parroting is useful at times, such as making an appointment or date.

Mirroring is NOT repeating or even remembering all the details of what was said. People think that just because they can repeat back everything that was said means they were listening. Hearing the words is not enough. Hearing the message the words are conveying, and saying that message back to the sender, is mirroring.

Mirroring is NOT saying “I understand.” Or “I get it.” The receiver may or may not understand, but the sender has no way to gauge whether they do or not. If the receiver actually does not understand, things could get worse later. “But I thought you understood!”

Mirroring involves the receiver putting his or her own viewpoint aside and letting the sender know in words that they see or know the sender’s point of view.

The receiver puts into words what the sender:

Stan had not said he was disappointed or that he missed Cindy. Cindy picked his feelings up and mirrored back to Stan how he felt. Even if Stan had actually forgotten that she had told him she would be late, Cindy is better off doing what she did, reflective listening, rather than arguing, defending herself or withdrawing in silence. As a result of Cindy’s reflective listening, what stood out for both of them was the positive connection between them – he missed her and she likes that he missed her.

Couples who are positively emotionally connected to each other have relationships that are strong through the good times and the bad times.

Caution: When mirroring, reflect back only the message sent. Do not add more than was said or try to put your own message into your response. That is, don’t put a spin on your response. That wont work, and it could easily make communication worse. Wait for your turn to say what you want to say.