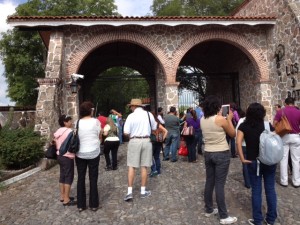 We’re riding along. The weather is good.  Our driver and tour guide, Gloria, is chatty, fun and engaging. If only I could understand what she was saying.  She has everyone in the bus introduce themselves and everyone claps after each says their name and where they are from. She cracks many jokes.  She tells me in English that she can’t translate jokes into English because they are not funny in English. Gloria tells me the organizer assured her there were no English speaking people on this tour.  She is shy about her English because she has been studying it for only six months.

Gloria prepares us for our first stop.  She asks me if I have ever heard of the famous Mexican singer, Vincente Fernandez.  I am about to say ‘no’ when I remember the videos showing on the Tequila bus.  She tells me we are visiting his 360 hectare ranch. (That’s almost 900 acres.)

We pull up to a beautifully maintained ranch, high white walls with the top trimmed with yellow and brown.  We pile out of the bus, joined two other buses loads of people (including the Tequila bus) and mill around in front of the large ornate iron gates.  It’s a hot sunny day and there are lots of people of all ages.  Look at all those jeans!

We wait and wait.  Gloria is on her cell phone a lot.  There is a problem, but I have no idea what it is. Gloria tells us to go to the store beside the entrance to the ranch for 5 minutes until she figures it out. She tells me that in Mexico they say 5 minutes but it really means 30 minutes.  My skeptic self thinks this is a ploy between bus drivers and store owners to get sales.  But I need to find el bano so am happy to go to the store. The store sends me to the restaurant beside them.  Off I go. It’s getting urgent.

Relieved, i go back to the store. Finally, Gloria sends word for us to come back.  But more milling around.  The people on the Tequila bus get back on their bus and leave.  Gloria gives us the scoop in Spanish.  A woman (from the other bus going to Chapala) standing beside me, translates for me. She noticed I didn’t speak Spanish.

Apparently, the day before, a Tequila tour stopped to see the ranch.  The famous singer was at home and accommodated families who wanted a photo with him.  While he was doing this, many of the other tourists rushed up to him all at once.  He was very upset by this.  He insisted today’s Tequila bus tour leave.  (See, I was not meant to go on the Tequila bus).

Next: We finally get to tour of the ranch.

Sent from my iPad